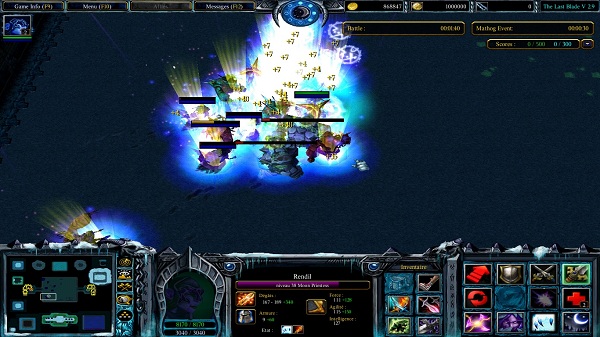 Two teams composed with the best warriors of each race will fight in a incredible and dangerous arena to get the legendary swords.

Some events will forces each team to reinforce their team play and their resistance.

It’s a terrible place where the weaks can’t survive!!! You can choose one of the 89 heroes to fight in this game and support your team and custom your hero with more than 95 items.

This game is a custom hero arena with specific and very differents heroes. Each team has to kill enemies heroes to get some points.

The first team that reaches the goal (number fixed by the mode) will defeat the enemy’s team. The maximum hero level is 50.

Every heroes have 5 uniques and custom spells all differents from the warcraft 3 spells and good loking with awsome effects.

Spells are divided in 3 classes

Their damages are calculated with the intelligence of the caster, you can see the formula below :

There is several events in the map :

The very strong outland guard Balnazzar will leave his desolated lands to arrive in the main arena by the fountain to kill alives heroes.

He has a permanent invisibility and a moderate strength.

The team that can kill him will get an amount of gold and medals in function of the time, you get a bigger bounty if you kill it earlier

The Doomhammer chaos general Mathog invites the entire team in his arena. The two teams will be separated in two arenas. The meaning of this event is to survive.

He’s a very strong enemy you can’t kill it.

If one hero from a team survive the entire team will get a 3000 gold and 20 medals. If Mathog had Killed all the team’s heroes nobody would have a bounty.

The two spirits Senarius and Vexxor make a bet about their duels. One hero for each team will be picked randomly, the first hero that will kill his spirit

Will give the Spirit Bull (+60 Every attributes during 7 minutes)

In this event Manototh calls the best hero of each team to come to fight against him. The hero with the biggest quantity of Attributes (Strength, Agility, Intelligence)

will be selectioned for this event. Every hero is move in a side of the Nerubian Ziggurath the first hero that will arrive to the spectral Door will have the right to fight

against Manoroth. The hero that defeat Manoroth will gives to his team the Destructo’s Aura during 8 seconds.

In the slauther arena there is Oz and his a undead army. His monsters respawn after 25 seconds. If a team kill Oz it will have a biggest bounty every time he’s killed.

Every time Oz dies it get +80 of each attributes and has 2 min respawn time.

This arena is disponible by stepping in the Slauther Arena circle

The Lich King has 3 very strong golems that are protecting the outland Kingdom, they got the divine rapier. This sword permittes them to forces dying creatures to stay into

the outland and not coming back in the earth.

If a hero kills one of them it will receives a divine rapier in his base.

In this arena you have to defeat the Lich King to receives his Legendary Sword : FROSTMOURNE!!!

You can go to his arena by stepping into the circle called Lich King.

This is a secret quest

Every heroes kills in this map will gives you some medals, this is a new ressources that permittes you to by some tomes to increases the hero’s attributes.

There is a few modes in the game :

-ar : All Random (Every player will have a random hero)

-nc : No Creeps (no neutral creeps in the arena)

-xc : extra creeps (double the number of neutral creeps in the arena)

-us : Unlimited Score (No kills Limit)

-oi : Only Intelligence (The other heroes can’t be picked)

-oa : Only Agility (The other heroes can’t be picked)

-os : Only Strength (The other heroes can’t be picked)

-dr : Dragon Mode (some dragons will spawn that gives bonus when killed)

-mc : Magic coin Mode (a coin is created on the map and gives to a team 800 gold and 5 medals when picked)

-view : to reset the camera view

-bug : to respawn a bugged hero (that doesn’t revive)