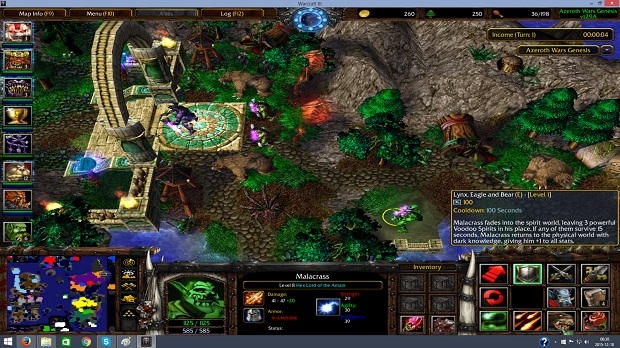 -New Elite for Brown, the Keeper of the Grove. Same unit as in LR, Worgen Elite scrapped and event temporarily removed.

-Earthcaller, Queldorei, Sunblade Magister have all been updated with the caster icon on the UI.

-Stonetalon terrain updated, should now be much easier to move around and fight in.

All Blue dragon and Red Dragon path melee units armor got buffed to keep up with other units.

-Added some extra towers and 2 Battleships to Feathermoon Stronghold.

-Thunder Bluff got a few more Towers and the units were moved from the outlying Bluffs to the middle Rise in order to make moving out abit smoother.

-Quel’Dorei High Priests are now Unarmored instead of Light.

-Flying Obsidian Statues are gone from Undead Flag ship summons and instead use the destroyed model as originally intended.

-Magtheridon is no longer a Purgatory hero.

From the Owner map Comment:
This is the last release before and including the holidays. After that I have a big test the 15th of January so it may be abit over a month before you get a new version. Personally it is very fun to flesh out these second chances, but it will be healthy for the map to return to the core factions.

The only people left without second chances are Pink and DG. Pink’s second is planned to be a small hero faction based around Darion Mograine that has events that brings it either into the North Alliance or Scourge. We will see how it ends up working.

Dark Green will be a full Worgen second chance based in Gilneas.

I have also put in a great deal of effort to try to deal with the problem of people disconnecting at the start, which sometimes happens. Restarting your wc3 between games always fixes it though, but there should be less triggers running in the first 10 sec of the game, which I belive will make the DC problem even less likely.

Anyway, have a merry X-Mas and a Happy New Year! And rememeber to always face any problems you face in life like Reno Jackson would: With a smile.