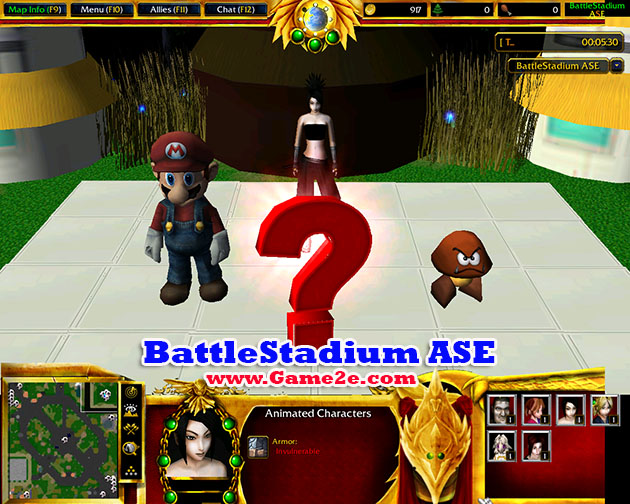 BattleStadium ASE a warcraft III modification project made by Aschenz-Kimutech. It was introduced in 2015 for the Warcraft III. It was uploaded in Epicwar and it was featured Super Mario Characters from the start ( Mario, Donkey Kong, Luigi, Peach, Yoshi, Diddy Kong, Toad, Boo and etc. ),  with Animated Characters ( Kailin, Nouhime, Tsunade and etc. ), all of them created by Aschenz-Kimutech for Wacraft III and those who love Mario Games. In BattleStadium ASE, up to eight – players can join  and can play three mode ( Mario Battle, Hero Arena and Boss Battle )  with the specific rules of each match being predetermined by the players. 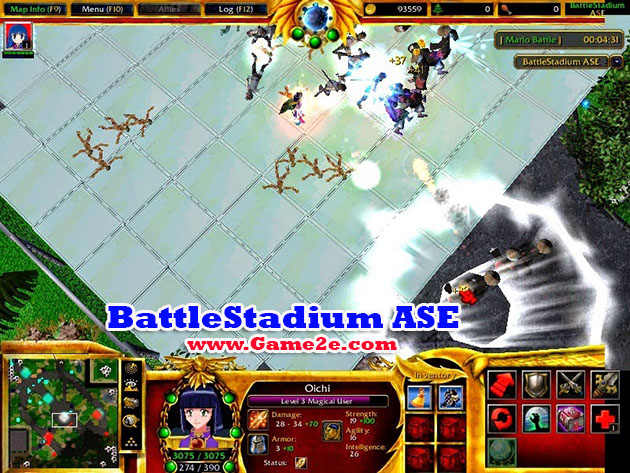 This character is not really Oichi I was been mistaken for this her true name is Sylphiel. She is a priestess of the shrine to Flare Dragon Ceifeed in Sairaag. When she was young, she took the bless blade from the shrine and hid it under the holy tree,Flagoon. This later proved to be useful, as the sword was needed to defeat Copy Rezo-Zannafar. After each destruction of Sairaag, Sylphiel was involved in the efforts to rebuild it. Her life revolves around helping other people. 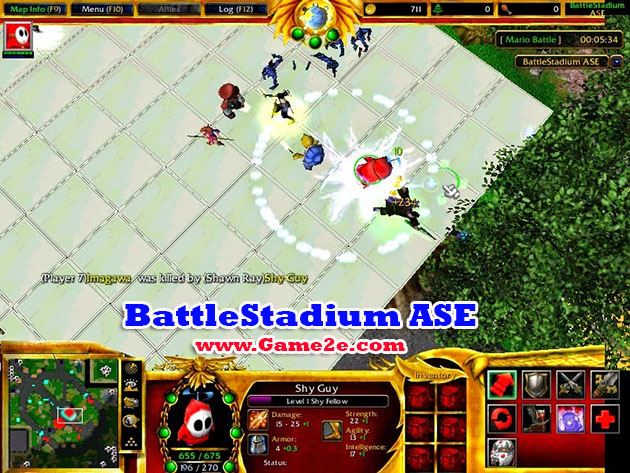 Shy Guy is an enemy from the Mario that first appeared in the irrelevant Yume Kōjō: Doki Doki Panic. This enemy never shows its true face to anyone and covers it up with a mask. The suits that this foe wears comes in plenty of colors such as red, blue, green, yellow and white.
PLAYABLE CHARACTERS 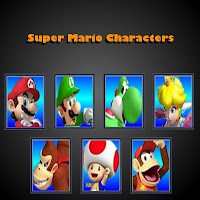 Mario is the main character and protagonist of the long-running and highly successful Mario series. Luigi (Japanese: ????, Ruiji) is Mario’s younger, taller, thinner twin brother. He is a major protagonist of the Mario series.Yoshi he usually has the role of a supporting character who tries to help Mario and Luigi on their adventures, although he occasionally has been as a main protagonist, such as in Super Mario Bros. Princess Peach (casually Peach, and up until Yoshi’s Safari referred to as Princess Toadstool), is the princess of the Mushroom Kingdom. Donkey Kong, also known as DK or D.Kong,[1] is a powerful hero Kong from Donkey Kong Island. Toad is a character who is Princess Peach’s attendant and a long time protector of the Mushroom Kingdom. Diddy Kong is Donkey Kong’s little buddy who has gone on countless adventures with him. Bowser, sometimes known as King Koopa 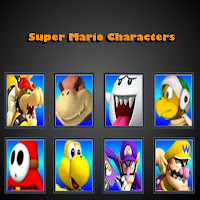 (Japanese: ??????, Daimao Kuppa or “Great Demon King Koopa”), is the main antagonist of the Mario series and the King of the Koopa. Goombasare allied with Bowser or the Koopa Troop. Some Goombas, such as the inhabitants of Goomba Village. Boo are allied with Bowser which he lived at Haunted House. Hammer Bro an allied with Bowser which he use his stone hammer to knock down his enemy. Shy Guy is an enemy from the Mario that first appeared in the irrelevant Yume Kōjō: Doki Doki Panic. This enemy never shows its true face to anyone and covers it up with a mask. The suits that this foe wears comes in plenty of colors such as red, blue, green, yellow and white. Koopa Troopa an allied with Bowser but must weak than Hammer Bro. Waluigi (Japanese: ?????, Waruiji) is Luigi’s very tall and skinny rival, and Wario’s partner. Wario (Japanese: ???, Wario) is a recurring character in the Mario series. He is an obese, muscular, hot-tempered, and greedy man, and Mario’s yellow-and-purple clad arch-rival. 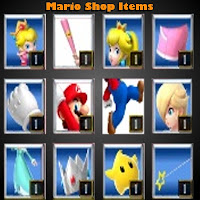