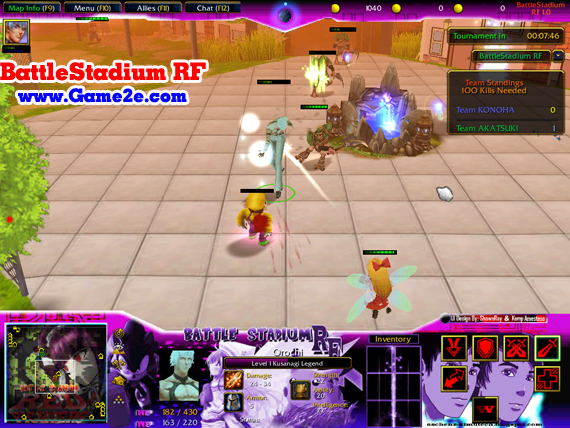 BattleStadium RF a warcraft III modification project made by Aschenz-Kimutech. It was introduced in 2015 for the Warcraft III. It was uploaded in Epicwar and it was featured cross over version ( Super Mario World, King Of Fighters, Pokemon, Megaman, Slender Man, Minecraft, God Of War and etc. ),  with Extra Characters (  Baby Sasha, Makki, Shirya Hood, Scarlet and Ashleigh. ), all of them created by Aschenz-Kimutech for Wacraft III. In BattleStadium RF, up to eight – players can join  and can play five modes ( AoS, Single Lane, Hero Arena, Destroy Zeed and Attack The Boss )  with the specific rules of each match being predetermined by the players.
Download: BattleStadium RF 1.2.w3x 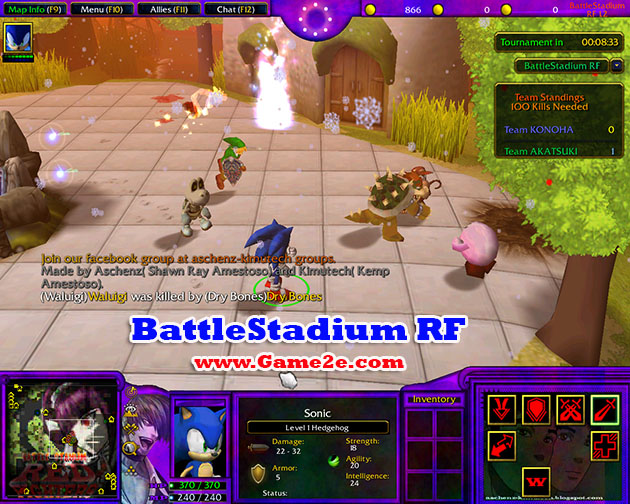 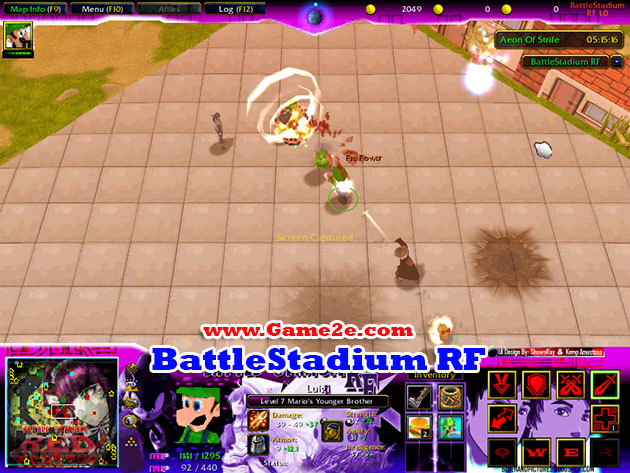 Luigi is Mario’s younger, taller, thinner twin brother. He is a major protagonist of the Mario series. Luigi has helped and fought alongside his brother on many occasions. Throughout his life, he has lived in Mario’s shadow, developing both cowardly and heroic tendencies.  Mario Bros. marks his first appearance in the Mario series and his debut in general. Originally a palette swap of Mario, Luigi was created to facilitate a second player option. 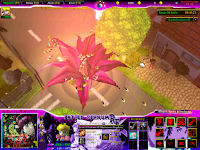 Princess Peach (casually Peach, and up until Yoshi’s Safari referred to as Princess Toadstool), is the princess of the Mushroom Kingdom. Peach first appeared in Super Mario Bros. and was created by Shigeru Miyamoto to be the damsel-in-distress throughout most Mario games. She resides in her castle along with many Toads. Her kingdom is often attacked by the Koopa Troop, a group led by Bowser. Peach has an affinity for the color pink, which accents her feminine personality and kind temperament. 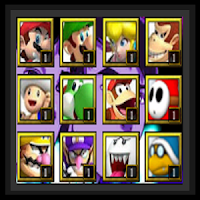 Mario is the main character and protagonist of the long-running and highly successful Mario series. Luigi is Mario’s younger, taller, thinner twin brother. He is a major protagonist of the Mario series. Yoshi he usually has the role of a  supporting character who tries to help Mario and Luigi on their adventures, although he occasionally has been as a main protagonist, such as in Super Mario Bros. Princess Peach (casually Peach, and up until Yoshi’s Safari referred to as Princess Toadstool), is the princess of the Mushroom Kingdom. Donkey Kong, also known as DK or D.Kong, is a powerful hero Kong from Donkey Kong Island. 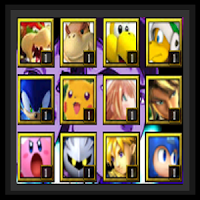 Toad is a character who is Princess Peach’s attendant and a long time protector of the Mushroom Kingdom. Diddy Kong is Donkey Kong’s little buddy who has gone on countless adventures with him. Bowser, sometimes known as King Koopa is the main antagonist of the Mario series and the King of the Koopa. Goombas are allied with Bowser or the Koopa Troop. Some Goombas, such as the inhabitants of Goomba Village. Boo are allied with Bowser which he lived at Haunted House. Hammer Bro an allied with Bowser which he use his stone hammer to knock down his enemy. Shy Guyis an enemy from the Mario that first appeared in the irrelevant Yume Kōjō: Doki Doki Panic. This enemy never shows its true face to anyone and covers it up with a mask. The suits that this foe wears comes in plenty of colors such as red, blue, green, yellow and white. 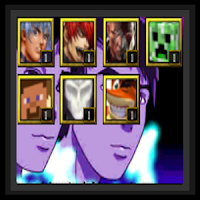 Koopa Troopa an allied with Bowser but must weak than Hammer Bro. Waluigi is Luigi’s very tall and skinny rival, and Wario’s partner. Wariois a recurring character in the Mario series. He is an obese, muscular, hot-tempered, and greedy man, and Mario’s yellow-and-purple clad arch-rival. Sonic the Hedgehog, trademarked Sonic The Hedgehog, is the title character and protagonist of the Sonic the Hedgehog series released by Sega, as well as numerous spin-off comics, five animated shows, and an animated OVA. Pikachu are a fictional species of Pokémon. Pokémon are fictional creatures that appear in an assortment of comic books, animated movies and television shows, video games, and trading card games licensed by The Pokémon Company, a Japanese corporation. 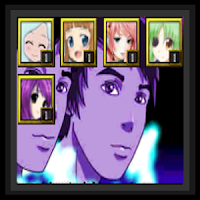 Link is the main protagonist of the Legend of Zelda series. He is usually depicted as a courageous young boy or teenager in green clothing who leaves his home and any relatives to pursue his destiny: fighting the evil forces threatening the land. Crash Bandicoot is the main protagonist of the Crash Bandicoot series. Originally named Willie the Wombat, he is an Eastern Barred Bandicoot living life on N. Sanity Island, who was captured and evolved by Doctor Neo Cortex. Kirby is a fictional character and the protagonist of the Kirby series of video games owned by Nintendo and HAL Laboratory. Mega Man, alternatively written as Megaman and MegaMan, known as Rockman in Japan, is a video game franchise from Capcom, starring the robot character Mega Man, or one of his many counterparts. Mega Man, released for the Nintendo Entertainment System in 1987, began a series of over 50 games on multiple systems. Isaac is the main protagonist of Golden Sun for the Game Boy Advance. His appearance as an unlockable Assist Trophy in Super Smash Bros. Brawl is his first appearance in 3D, as well as the first appearance of Golden Sun in any official format since 2002. Meta Knight is a playable veteran character in Super Smash Bros. 4. He was revealed on August 13th, 2014, being teased before hand on the 11th. Kratos, the “Ghost of Sparta”, is a fictional video game character from Sony Santa Monica’s God of War series, which is loosely based on Greek mythology.  Orochi in The King of Fighters is a version of the Kusanagi legend. He is the final boss of The King of Fighters ’97. He has white hair, white trousers, and a tattoo across his chest, though this appearance is mainly due to his possession of Chris. Iori Yagami is a character from the SNK Playmore’s The King of Fighters video game series that first appeared in The King of Fighters ’95 as the leader of the Rivals Team. He is an iconic character of the series, and regularly appears on publicity material and merchandise. Slender Man is a supernatural creature with nebulously defined characteristics and abilities. Slender Man was first mentioned in Something Awful Forum’s “Create Paranormal Images”. Creeper is a common hostile mobs that explode when close to the player. Player is the character that users control in Minecraft, and is generally considered the unofficial main protagonist of the game. The two default player skins are known as Steve, a name suggested by Notch as a joke[1] and confirmed on the ‘Profile’ page near the section that allows you to change your skins, and Alex, with all unchanged skins being split between the two default skins.
ITEMS 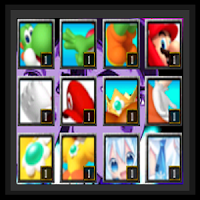 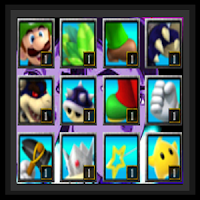 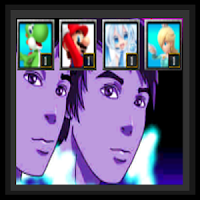 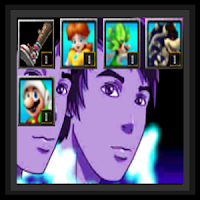 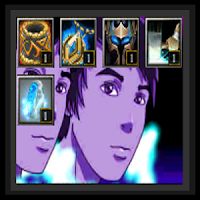 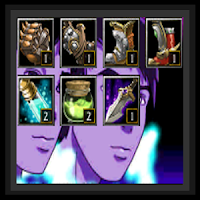