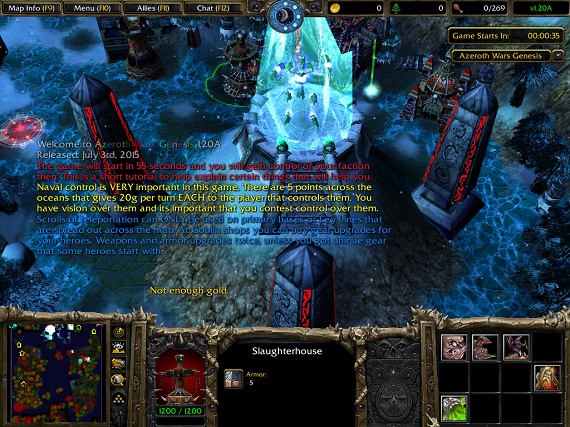 Azeroth Wars Genesis 1.30A Changelog:
New:
-New Hero pick for Brown, Lunara the Dryad replaces Fandral if picked.
-Varian model has returned.
-Dark Green, Teal and Green will now get a message on turn 2 that tells them where their unit spawns and how many can spawn in total.
-Galen has worked out, lost some fat and now has Jump.
-Gahz’ranka is now permanent when summoned (stationary) by the Hakkari in Zul’Gurub, but the upgrade to do so now costs 100g.
Every player now starts with 1 Battleship type unit.

Balance:
-All “new” Second chances (Centaurs, Amani, Red Dragons, Blue Dragons, Murlocs and Hakkari) Now start with 200g, regardless of what you had before.
Nerfed base hp of Skybreaker and Orgrim’s Hammer by 1000 (to 4000).
-Nerfed most players starting gold by roughly 100g. Horde remains the same.
-Naval Straits now only give 10g per min, down from 20g.
-All Stun Upgradeable items now only stun for 1 second, down from 2. (To Fix Yellow Melee perma stun)
-Jubei killing himself now only gives 2000XP to Archimonde, down from 4000.
-The Butcher now only gains 2.5 STR per level, down from 3.5.
-Nerfed Malygos stats by 10 in all three categories.
-Nerfed Tortolla. Should spawn abit less now.
-Ghaz’rilla that is summoned by the Mallet item now has 3000hp, up from 1600.
-Gift of the Naaru Mana cost (Velen) greatly increased.
-Sword Throw (Galen) can now hit air units.
-Nature’s Fury (Brown Nuke AOE) Got nerfed to single target dmg 50, down from 75, splash remains 50.
-Buffed Sgt Doomhammer with +5 to STR and AGI.
-Chance for Terminators to turn hostile to their Gnome Overlords reduced from 5% to 2% on attack.

Bugs:
-Fixed a bug with a Green tower.
-Text for spawning Shadowprey Village will now only appear for Kalimdor players.
-Ogres summon from Dreadmaul Rock now requires Greens Demi Urok Doomhowl.
-Fixed a bug where Yellow didnt get Mortar abilities. Flare is back!
-Mastery vision area should once again mean you only see your and you allies building.
-Fixed a bug with Kil’Jaeden Summon.
-Fixed Galen tooltip.
-Hunter’s Hall no longer require Nordrassil.

Personal Comment:
Since so many people who join this game are completly new to it, the goal here was to slow down the starting game, with less gold going out.

Furthermore, it is unfortunatly clear that alot of people either didnt understand the information about Naval CPs or simply didnt posses the ability to both fight at land and sea. So Naval gold got nerfed, but Naval starting forces got buffed. I asked Hannibal to terrain a Night Elf naval base in Aszhara a while back but it has not been done so I will have to deal with it myself eventually so NE dont have to sail from Darkshore to compete on the seas.

Lunara fits into the Brown Elite squad, but if you pick her, you have no melee hero. She deals high single target dmg over time. She is intended for players who like the hero sqaud playstyle.

Second Chances are weak and die when they encounter two players that fight against them, the only way to win with them is either get a good rush in with them while your enemies fight eachother, or ally someone else. I think that is fair, but one problem was people hoarding gold before dying, spawning as Hakkari with 1000+ gold and destroying. Hell, that strategy even made sense when your ally sucked and you knew you would loose. So now they only have 200g to start with.

Since The flying capital ships can be repaired, nerfing their hp is just fine. I want to see these be used by good players who repair and not just A+move over your army.

Masteries Tier 1 were planned for this version but seeing the large chancelog, I felt it unjust to wait 2-ish weeks to implement all this stuff just for them. I try to keep my changelogs to a reasonable lengh