World of Warcraft: Clash of Legends is another World of Warcraft total conversion project of mine, it is a fun-to-play classic Hero Arena play-style featured with memorable characters from World of Warcraft franchise. Play as Team Alliance or Team Horde and join the battle conflict between two great faction on Team Battle Mode, or even team up between the two faction and try Boss Mode; challenging the mighty Lich King himself which made some people rage quit! Mediocre AI included, enough to keep you entertain the whole game. 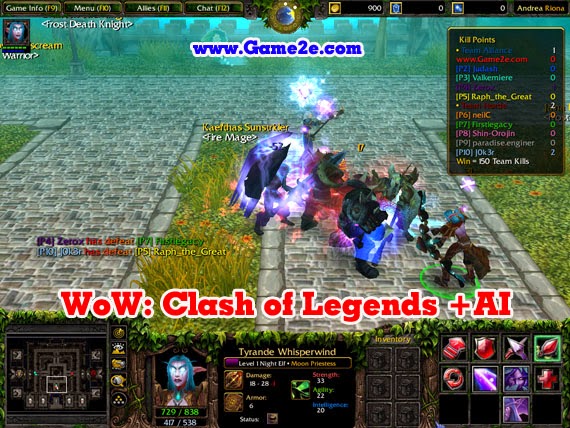 Lore Characters from World of Warcraft
Over 10 playable characters from the oldschool Paladin Arthas Menethil into the most recent “corrupted looks” of once, kindly sorceress Jaina Proudmoore. Including filler yet cool characters from lore that nobody cares about: Teron Gorefiend and Dranosh Saurfang!

Total Conversion Materials from WoW
All materials has re-created, poly reduced, geomerged and edited by myself for the multiplayer project usage purpose.

Attributes Scaleable Abilities
Q-W-E-R and D-F active spamable abilities up to level 10 with comfortable hotkeys to use! All abilities are scaleable by attributes and base level.

Enchanting, Total-Conversion Terrain
Featuring an arena based off from the looks of Stormwind city theme! (Which actually a garden concept from a long-ago project) Terrain theme might be change from time to time.

Moving Creeps
All creeps are able to walk around the arena instead of only standing there doing nothing, chillin’, including Boss when you activated Boss Mode – So it’s not you that come to them, but it’s them that come to you. Aww!

Custom BGM and Voice Clips
Featuring an intense battle themed BGM and voice clips of the characters screaming, yelling – whatever you name it on Q and R abilities like in typical Hero Arena map nowadays. “why not include voice clips on all Q W E and R instead?” Because this isn’t a live concert.

The terrain featuring arena based-off from a garden-ish version of Stormwind City blended with moon-ish theme of Night Elves. Here are some first impression in-game screenshots.