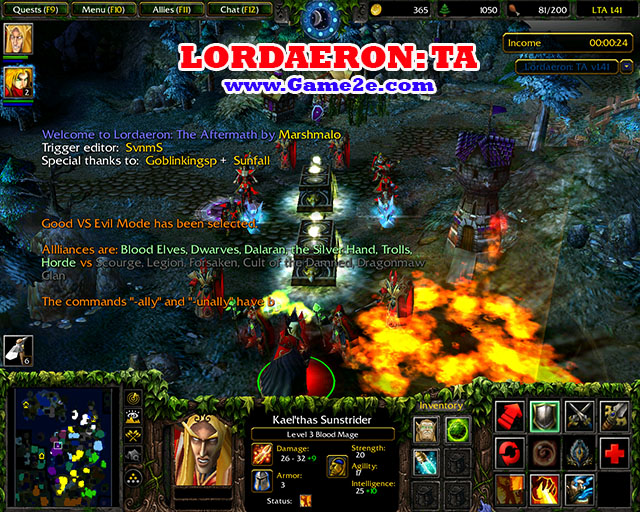 GENERAL CHANGES
– Loch Modan has received a significant reterrain. The Dam has been changed into walkable terrain, forming a bridge to each side of the Loch. The Mo’grosh Stronghold there now also has a path leading to Grim Batol. This change will have a major impact on the south fight. (NEW)
– The Book of Medivh can now be dropped on the ground and given to other heroes without needing to kill the bearer. This opens up for more interactive diplomacy about such an important item, and reduces frustration. (NEW)
– Silverpine Forest now has an additional access point to the sea
– A lot of grammar and text typos have been fixed
– Cosmetic changes to several units, heroes and buildings and smaller areas
– Many heroes has had their movement speed adjusted. A lot of heroes were too slow, and many also too fast.
Flying heroes like Falstad, Nadox, Kalecgos, Nefarian and Sindragosa are now much slower and share the same movement speed.
– The Syndicate creep camp in Darrowshire, Eastern plaguelands has been removed. The spawn conflict for Nathanos was too awkward.
– Eastern Plaguelands now has more trees, especially closer to Tyr’s Hand.
– Quel’thalas has slightly fewer trees in the large chunks of forest. 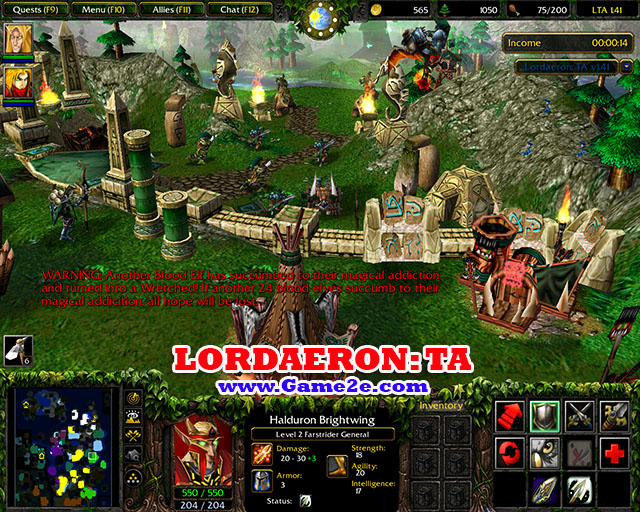 Blood Elves
– Fel Blood now deals the same amount of damage to the caster as it heals to surrounding units. (Previously dealt 400 damage to caster, now deals 250) The radius of the spell is reduced, however.
– Blood Elf Swordsmen now has 650 health instead of 505, and their gold cost has been reduced to 15
– Spell Breakers have 725 health and their armor is changed to Medium from Heavy. (NEW)
– Blood Queen Lana’thel is now considered an Undead unit.

Scourge
– Summoning Anub’arak is now a research instead of a spell. You may now research Anub’arak at any Necropolis instead of the Frozen Throne.
You also no longer receive gold for summoning Anub’arak.
– Anub’arak now spawns as level 5 instead of scaling to the level of Arthas.
– Elder Nadox’s item, Sceptre of the Spider Kingdom, has been given to Anub’arak instead and renamed Sceptre of Nerub. (NEW)
– The movement speed of Sindragosa and Elder Nadox has been reduced.
– Sindragosa’s Frost Wyrm summon cost 50 more mana, has a 2.5 minute cooldown and duration of wyrms reduced to 45 seconds.
– The Death Knight in Icecrown has been removed
– Captain Falrics Raise Peasants spell has been buffed. It now spawns more powerful zombies instead of vanilla skeleton warriors.
– The frost wyrm in Silvermoon is removed
– The insane 10 sec duration on Crypt Fiend’s Web has been reduced to 5
– The Lich King’s Remorseless Winter has been changed. It is now called Deathfrost. The Ice Fragments this ability spawns no longer melts armies. Instead, they deal damage where they spawn, and then emitts an aura that reduces enemy movement and attack speed by 20%. The crystals do not stack their auras. (NEW)

Legion
– Fixed a bug where Detheroc could no longer Mind Control Garithos if Balnazzar died before Detheroc.
– Infernals now has 2500 health instead of the insane previous amount, but their gold cost is reduced to 50. You can now only have 6 Infernals trained instead of 8.
– Fixed a bug where you could summon Kil’jaeden at the top corner of Twisting Nether
– Kazzak’s Bleed spell is nerfed. It requires more mana per tick, and heals slightly less.
– Infernal Machine siege units has less splash damage
– Balnazzar’s Horn now drops upon death. (NEW)
– The respective spells of Balnazzar, Varimathras and Detheroc have been rearranged. (NEW)

Dalaran
– Dalaran’s force bridge withdrawal now has a 5 second casting time.
– Kul Tiras now starts with one extra Battleship and one extra Frigate.
– Siege Golem’s health has been increased from 1100 to 2000.
– Footmen now has 650 health instead of 505, and their gold cost has been reduced to 14 from 16
– Maiev Shadowsong and her watchers now spawn in the new sea area in Silverpine
– Kalecgos in Dragonform is much slower
– Kalecgos can no longer summon permanent dragons. The spell is disabled, for now.
– Arcane Shield Generators now has 500 hit points instead of 650. Construction time is also increased from 40 seconds to 1 minute.
– Chains of Banishment now lasts 0.50 seconds instead of 0.70. Cast range reduced from 1000 to 800. The damage dealt to Demons by this ability is also reduced to 200 from 250
– Rhonin has Frost Armor instead of Brilliance Aura. The reason behind this is that Khadgar has his Pipe of Insight, and the two auras do not stack. I might consider adjusting the mana gain from the pipe, however it might be needed. (NEW)

Dwarves
– The units standing guard outside Ironforge has been removed. Dwarves in Ironforge now has to rely more on mobilising their forces from outlying bases in order to muster up a large force early.
– Bear Warriors has -1 armor
– Falstad Wildhammer has slower movement speed.
– Anvilmar now starts with a small force of soldiers.
– Thelsamar has been added as an actual building, and some of the units that start in Ironforge has been moved to Thelsamar.
– The ship fleet anchored at Dun Garok has been moved to Menethil Harbor, and Menethil Harbor has a few more soldiers.
– Mountain King elites’ Enchanted Ale spells heals for 175 instead of 250, and costs 25 more mana
– Thargas Anvilmar may now cast Enchanted Ale as well
– Keegan Firebeard is still just a large unit with no spells other than Bash, but his armor and hit points has been buffed massively to make him worth the effort of keeping him alive
– Siege Engine tanks have +350 health and +2 armor, but their attack range is reduced from 1000 to 400. Their formation AI makes them automatically move more forward in an army when right clicking.

Dark Horde
– Drastically reduced the damage done by the Withering Hand spell for Death Knight elites
– In order to save space, Proto Drakes are now changed to Chromatic Drakes. This fits better both lore-wise and in terms of filesize.
– Chromatic Drakes has 500 less health and -1 armor.
– Death Knights Summon Doom Guards cast range is halved, the Doom Guard lasts 25 seconds instead of 1 minute, and the cooldown is increased to 130 seconds instead of 80 seconds
– Nefarian’s movement speed is reduced
– Infernal Machine siege units has less splash damage
– The Black Temple starts with a few more troops (NEW)

Forsaken
– Sylvanas’ movement speed has been reduced.
– Apothecary casters are now tied to Undercity instead of the Royal Apothecary. A solo faction should not be reliant on keeping a small building alive the entire game to possess dispel.

Cult of the Damned
– The undead form of Alexandros Mograine now has a massive movement speed boost. Previously he walked much slower than most heroes, which is a bug.
– Undead Alexandros Mograine now has Death Coil instead of Undead summons
– Alexei Barov has Cursed Ground instead of Death Coil
– Flesh Golems train limit has been reduced to 2 instead of 4, but their health is now 2400 instead of 1600.
– Cult may now train 10 Sludge Belchers, that are slightly upgraded abominations. This is to secure Cults frontline against heavy AoE dispel.
These Sludge Belchers along with 2 flesh golems makes a powerful frontline control group
– Arch Necromancers now raise Twisted Wights instead of Abominations. These wights do not have Bile Explosion, and their stats are adjusted. The Twisted Wights also has a 8% critical hit chance to remedy the lost explosion.
– The Demi-hero abomination from Deathholme, Knucklerot, has been moved to Stratholme and renamed Ramstein the Gorger. It is now tied to the Stratholme building instead.
– The limbs of Patchwerk has been changed to Necromantic Fragments. Picking up Necromantic fragments no longer reward gold and lumber.
– Drak’tharon Keep now has stronger towers, but the Flesh Golem is no longer there at the start
– Plague Cauldron spell has been reworked. It now spawns zombies more intensively, every 5 seconds.
The cauldron now lasts 15 seconds, meaning that 3 zombies will spawn off one cauldron. The duration of zombies is 35 instead of 40, and the cooldown of the spell is increased to 100 seconds up from 80
– Destroyers has 1 less armor and 400 less health
(Heigan the Unclean will be postponed in order to check how the community reacts to the Cult changes. He may be too much.)

The Silver Hand
– The Risen path for the Scarlet Crusade has been temporarily disabled. The quality of this path isn’t sufficient enough to be available in-game.
– Alexandros now has Righteous Combat instead of Light’s Hammer as his E spell. Righteous Combat gives a passive critical hit and evasion chance that increases with each level. Mograine had too many AoE spells. (Light’s Hammer, Judgment ultimate and Ashbringer item spell)
– The hit points of Brigitte Abbendis has been severely reduced.
– Footmen now has 650 health instead of 505, and their gold cost has been reduced to 14 from 16
– The Silver Hand may now trigger several more of their events in more bases, like in Southshore, Mardenholde, Valiance Keep etc
– A few of the soldiers from Hearthglen has been moved to Southshore to make Garithos’ army more usable at the start. Southshore now starts with a Battleship as well
– Knights has +100 more health, and their gold cost is reduced to 25 from 27. (NEW)

Troll Empire
– Fixed a bug that allowed Hexx to summon Hakkar/Akil’zon instantly. The sacrifice spell in Jintha’alor now requires a 5 min research before it can be used. (NEW)
– Zul’Aman starts with several more soldiers, both melee, ranged and casters
– Vile Priestess Hexx is finally depicted as a female in-game, with a new model and voice
– Icetusks mammoths have much smaller splash damage, and their attack damage is reduced by 25%

Dragonmaw
– Fel Orc Grunts has 60 more health and +2 armor
– Dragonmaw Port now starts with more troops, including 2 more catapults (NEW)
– Dragonmaw Battlemasters has 125 more health (NEW)
– Mana pool of Dragonmaw Ascendants has been increased to 260 from 190, and their armor increased from 2 to 5
– Fel Blood now deals the same amount of damage to the caster as it heals to surrounding units. (Previously dealt 400 damage to caster, now deals 250). The radius of the spell is reduced, however.